The Melanias of Late Antique Christianity 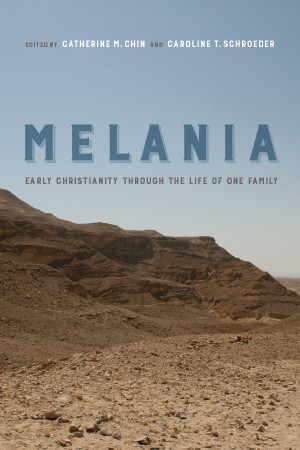 This fall, I will have the privilege of seeing a book I co-edited with the amazing Catherine M. Chin appear in print.  Melania:  Early Christianity through the Life of One Family contains articles by an incredible set of scholars all addressing the life, context, and legacy of Melania the Elder and Melania the Younger.  We are so pleased that the Christianity in Late Antiquity series at the University of California Press has picked it up.

The Melanias were probably the richest women in the Roman Empire during their lifetimes — maybe even the richest people in the Empire.  They influenced imperial policy, church politics, and religious doctrine.  In some ways, they were badass.  They didn’t let men stand in their way.  In some ways, they were disturbing figures.  As part of their wealth, they owned countless slaves.

Their influence on Roman history and Christian history received scant attention until the work of feminist historians in the late 20th century, especially the work of Elizabeth A. Clark, who translated the life of Melania the Younger.

I hope you enjoy the book.  And more importantly, I hope it leads you to think differently about early Christianity, historiography, and legacies.

The lives of Melania the Elder and Melania the Younger span one of the most important periods of Christian history, reaching from the reign of Constantine through the reign of Theodosius II. They and their family members were well known to some of the most influential political and cultural figures of the period; their patronage promoted the work of major Christian thinkers from both before their time and during it. Their property and travels connected the political, economic, and religious worlds of the late antique Mediterranean. This volume examines the history of early Christianity as it was created and imagined through the lives of the two Melanias. The volume overlays the history of Christianity with a set of narratives that explore themes in the lives of the Melanias, such as constructions of gender, asceticism, orthodoxy and heresy, family and wealth, travel, patterns of memory, worship and hagiography. The resulting collaborative portrait of this family, its influence, and its interests offers a new window on to early Christian history, not by portraying Christianity as a timeless entity unfolding over centuries, but by considering in more complex ways the lives, representations, and later reception of two late ancient persons who attempted to be Christian.

Part V. In the Holy Places

Chapter 15. The Future of Sainthood, Elizabeth A. Castelli

Previous PostThe Power of the “Woman Card”
Next Post On Kindness and Critique: my thoughts 2 years ago on the “Gospel of Jesus’s Wife”