Whose heritage are we remixing? 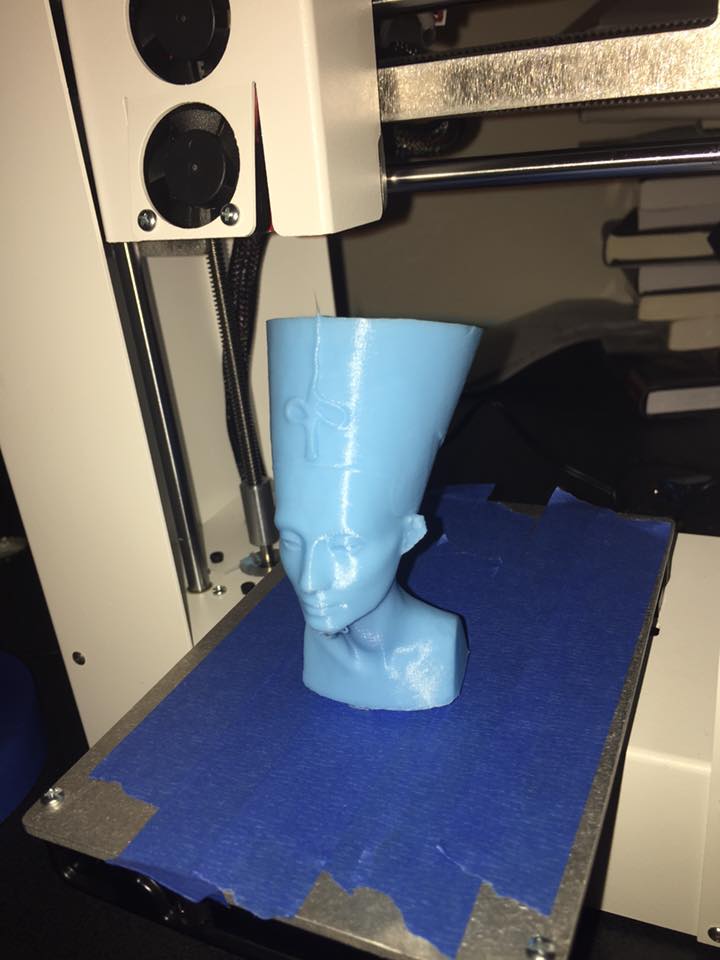 This past spring, I purchased a small 3d printer with the goal of experimenting with it to understand 3d fabrication a bit better before taking the Physical Computing and Desktop Fabrication class at DHSI.  I also am really interested in the release of 3d models of museum objects, both before and in the aftermath of the “Nefertiti Hack” event.

So many antiquities from the Middle East, especially ancient Egypt, currently reside in European and American collections, sometimes deposited there after officially authorized digs, sometimes not.  All of these objects are dislocated from their original physical context.  They are in from one perspective disembodied, despite their material existence in a museum.  They are also de-historicized (removed from their original historical context) and re-historicized through the mediating media of the museum gallery object descriptions, gallery information, audio tours, and human docent tours.

I’m really interested in the phenomenon of 3d models of museum objects now on the web, which users all over the world can modify, print, whatever.  With the Nefertiti bust, the code for the 3d model was proprietary, locked down on the Berlin Museum servers until released by the performance artists last spring.  Other museums, like the British Museum, have their own channel on modeling sites such as Sketchfab.  Egyptomaniacs can download scans of a bust of Ramses II, a giant scarab beetle, or other antiquities in their collection and modify them or even print them.

I downloaded quite a few objects and set out to print them on my Printrbot Play.  I also printed out the Nefertiti bust, using the code from the “Nefertiti hack” artists. I had some complex reactions to the process.

Every successful print led to some exhilaration, of course — I got the tech to work.  Yay me.

I also found myself scrutinizing the details on the onscreen model and comparing them to the print as they came out, to study what the print maintained and to see what the print lost due to the small scale.

I also felt increasing anxiety and discomfort with each successive model.  These prints were blue plastic versions of the tourist keepsakes on sale at every pharaonic site and every souk (outdoor market) in Egypt.  Or in the gift shops of museums.

In other words:  my mind immediately leapt to the commodification of these cultural heritage objects.

I was not the only one.  After I posted a few of these prints to my Facebook page, a friend and colleague suggested I print out a bunch and sell them at the upcoming Congress for the International Association of Coptic Studies.  S/he was kinda sorta not really joking.

The thought I could take code from the net, download it, and print a replica of a possibly looted antiquity, do what I want with it, and then resell it was not actually exhilarating.  It was discomfiting.

In my Introduction to Digital Humanities course, my students and I read together Melissa Terras’s article “Re-use of Digitised [Cultural Heritage] Content.”  Terras urges “galleries, libraries, archives and museums” to put open licenses on their digitized content, so people can reuse and remix cultural heritage objects for artistic or creative projects.  As someone who works on antiquities housed in European museums and libraries, I wish more repositories were digitizing more content and providing open licenses.  My students, however, read Terras’ piece from the perspective of artists and communities of origin for these cultural heritage objects.  Most of my students reacted very negatively to the article, asking what gave us the right to remix other people’s art?

As my scarab, Ramses bust, and Bastet figurine printed out, I found myself asking the same questions my students did.  What right do I have to manufacture these objects here in my home?  Granted, there is no living community for whom these objects are sacred.  But I did feel somewhat uncomfortable mass-producing them in the comfort of my own house in California.

More soon on my perspectives after more experience in 3D fabrication in my DHSI course.

1 thought on “Whose heritage are we remixing?”