The Coptic SCRIPTORIUM project is pleased to announce that we have been awarded two grants from the National Endowment for the Humanities.  A grant from the Office of Digital Humanities will support tools and technology for the study of Coptic language and literature in a digital and computational environment.  A grant from the Division of Preservation and Access will support digitization of Coptic texts.

Press Release from the University of the Pacific:

Google has transformed the way we seek knowledge, and most questions can be answered with, “There’s an app for that,” but there are still corners that no search engine or web application have yet reached, among them rare writings in a dead Egyptian language.

With $100,000 in new grants from the National Endowment for the Humanities, Caroline T. Schroeder, associate professor of Religious and Classical Studies at University of the Pacific, plans to change that. Working in collaboration with her project co-director, Amir Zeldes of Humboldt University in Berlin, Schroeder’s goal is to make Coptic accounts of monks battling demons in the desert, early theological controversies, and accounts of life in Egypt’s first Christian monasteries as easy to access online as the morning’s latest news.

“Dr. Schroeder is a distinguished scholar and spectacular teacher, and there is no one more deserving of this prestigious recognition,” said Dr. Rena Fraden, dean of College of the Pacific, the liberal arts and sciences college at University of the Pacific. “Nations – ancient and modern – will always be judged for their contributions to knowledge and the arts. Pacific and Carrie Schroeder belong to this glorious tradition.”

Schroeder received a $40,000 Humanities Collections and Reference Resources grant, which will enable scholars not only to digitize core Coptic texts housed at institutions around the world, but to develop standards for future digitization projects. She also received $60,000 Digital Humanities Start-Up Grant; it will allow scholars to develop the tools and technologies necessary for computer-aided study and interaction with the materials.

The study of Coptic texts has gained attention in recent years, with high-profile controversies including the announcement in 2012 of an apparent Coptic papyrus text that may refer to “Jesus’ wife,” and increased international focus on the political climate of Egypt.

The digitization of these texts, and the database that Schroeder and her colleagues are working to create, will allow students, researchers, and non-academics alike to translate, analyze and understand the content of these Coptic texts, and to cross-reference the material with other texts and resources, including dictionaries and lexicons.

“This is the most cutting edge grant you can get for this type of work,” said Schroeder, who has taught at Pacific since 2007 and is the director of the Pacific Humanities Center. “This is about creating the technology for the study of the humanities. There aren’t that many technologies that work for Coptic or Egyptian texts. It’s an entire language family, and an important one for history, language, art. This is a world cultural heritage, a study of how our world and culture came to be.”

It will also create a centralized, open-source archive where these texts can be accessed in their entirety, anywhere in the world. This is particularly important, as many of these texts have been separated over centuries; reading one letter penned by a Coptic author may mean traveling to several different libraries and museums across the globe to track down the full account. While some Coptic manuscripts have been published in print, others have not.

“There are a lot of materials from this time and place that need more study. You have to know, if you want to read a letter, that some of the pages are going to be in London, some in Naples, some in Paris,” Schroeder said. “These documents and texts are primarily housed in Western museums and libraries, and our project is committed to being open-access, and to being available to everyone, including people in the country where these texts originated.”

This multi-disciplinary project has involved work with scholars from around the world, as well as collaboration among faculty and students at Pacific. Lauren McDermott, an English major with a Classics minor in the College, learned the Coptic alphabet in order to help proofread, digitize, and encode texts; Alexander Dickerson, a Computer Sciences major in the School of Engineering and Computer Sciences, worked on the coding as well. 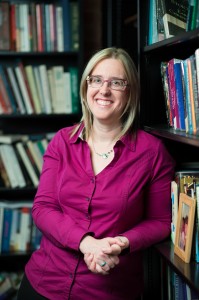 About the National Endowment for the Humanities
Created in 1965 as an independent federal agency, the NEH supports research and learning in history, literature, philosophy, and other areas of the humanities by funding selected, peer-reviewed proposals from around the nation. For more information, visit www.neh.gov.

About University of the Pacific
Established in 1851 as the first university in California, University of the Pacific prepares students for professional and personal success through rigorous academics, small classes, and a supportive and engaging culture. Widely recognized as one of the most beautiful private university campuses in the West, the Stockton campus offers more than 80 undergraduate majors in arts and sciences, music, business, education, engineering and computer science, and pharmacy and health sciences. The university’s distinctive Northern California footprint also includes the acclaimed Arthur A. Dugoni School of Dentistry in San Francisco and the McGeorge School of Law in Sacramento. For more information, visit www.pacific.edu.