Two pillars in the fields of Digital Humanities, cultural heritage, and the manuscripts of the Eastern Mediterranean world received honors this month, and we at Coptic Scriptorium wish to congratulate them both. 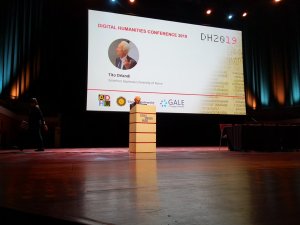 Tito Orlandi at DH2019, photo by Fabio Ciotti via Twitter

Dr.  Tito Orlandi was awarded the Busa Prize for lifetime achievement by the Alliance of Digital Humanities Organizations at the annual Digital Humanities Conference in Utrecht.  This honor is bestowed only every three years and thus is quite a distinguished award. Tito’s work in text encoding, developing stable identifiers for manuscripts, digital lexica, and digitization has been foundational for Coptic Studies.  He founded the Corpus dei Manoscritti Copti Letterari
(CMCL) project.

Dr. Columba Stewart, Director of the Hill Museum and Manuscript Library at St. John’s University, has been named the Jefferson Lecturer by the National Endowment for the Humanities for 2019.  Other luminaries who have received this honor include Toni Morrison, John Updike, and others.  Columba’s scholarship on early monasticism—especially Evagrius and Cassian—is well-known, widely respected, and oft-cited.  He is being honored by the NEH in particular for his work at HMML to collaborate with communities in the Middle East to photograph and preserve manuscripts manuscripts from both Christian and Muslim communities and traditions that are endangered for various political, cultural, and geographic reasons.

On a personal note, Tito has been a supportive colleague long before Coptic Scriptorium existed.  At my first Congress of the International Association of Coptic Studies in Leiden in 2000, Tito chaired the session in which I gave my paper.  I will never forget when my slides first went up on the screen with one of my photographs of the White Monastery Church, he warmly remarked how happy it made him to see the White Monastery.   This sounds like a small thing, but for a grad student at this international conference for the first time, it was a reassuring way to start my paper.  When we began Coptic Scriptorium, Tito shared with us his digital lexica, which allowed us to shave at least a year off of our labors. Conversations with Tito over the years have enriched our work.

Likewise, Columba has been a kind and generous colleague and mentor since we first met in 1999 at the Oxford Patristics Conference.  Columba’s research on early monasticism has inspired me for a long time, and his work at HMML and the vHMML online reading room is a model for public-facing cultural heritage preservation and collaborations between American scholars and heritage communities in the Middle East.  Columba’s work is sometimes framed as saving manuscripts from ISIS, but Columba himself talks about the American role in the loss of cultural heritage in the Middle East and is, in my opinion, open about the geopolitical and colonialist power dynamics at work. As I said more informally to some friends on social media, Columba is 100% the real deal.

Additionally, for those of us who work on Christianity in the ancient Eastern Mediterranean and the languages and manuscripts of these communities, these two awards cast a warm glow over the whole field.  Thank you Columba and Tito for your work, and thank you to the ADHO and the NEH for honoring them and by extension their areas of work.

A warm, sincere congratulations to you both!